On the occasion of the solo exhibition 'Imaginings | Dutch Design by Kiki van Eijk' launches by TextielMuseum a collection of tea towels designed by Kiki van Eijk. Home-grown tomatoes, courgettes and radishes from her own vegetable garden steal the show in this series of tea towels in honour of the celebrated Dutch designer's 20th anniversary.

In the exhibition 'Imaginings' you step into the wonderful world of the Dutch designer. Kiki van Eijk has built up an international reputation with a poetic oeuvre of objects from glass and ceramics, to furniture and textiles. The exhibition was designed by Kiki van Eijk in collaboration with scenographer Theun Mosk. Each space is dedicated to an aspect of her 20-year oeuvres, such as the imagination, the creative process and nature. Van Eijk also based the new series of tea towels on nature, with sketches of vegetables grown herself from her vegetable garden. Museum visitors discover the design and production process of the tea towels in the exhibition and in the TextielLab you can see live how the tea towels are woven on the machines.

Vegetable garden in the house

With her tea towel collection called Botanica, Kiki van Eijk puts her vegetable garden in the spotlight. Home-grown tomatoes, courgettes and radishes are the source of inspiration for the chalk sketches that form the basis of her designs. By 'mixing' thin yarns in five different colours, she translated the rich colour palette from her vegetable garden into textiles. With the pattern on the edge of the tea towel, the designer makes a subtle reference to 20th-century household textiles from the TextielMuseum collection, where a graceful border of flowers and leaves was very common. 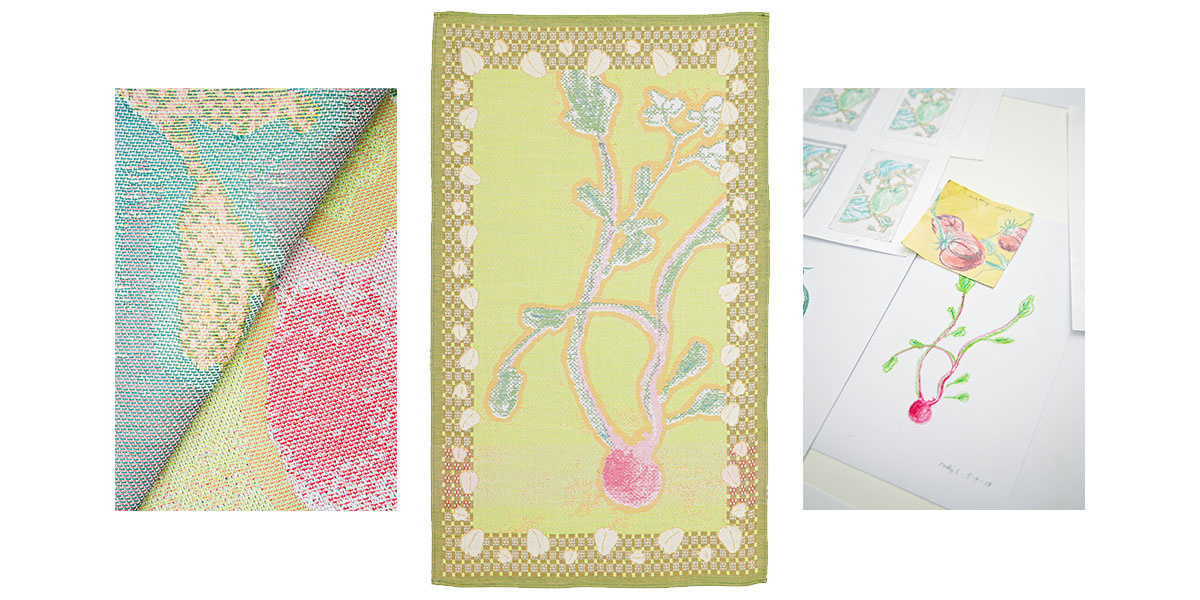 All textile products of the label by TextielMuseum are produced locally in the TextielLab of the museum. The tea towels of the Botanica collection are made of 100% organic cotton. The size is slightly longer than the average tea towel because the size is not based on the standard size but on the capacity of the weaving machines of the TextielLab. In this way, the entire fabric that comes out of the machine is used, so that no residual material remains and nothing is thrown away.

Curious how this collection is made?

From designers, to textile specialists and high-tech machines. We will show you every step in the making process.